After collecting 35 years of Jiu-Jitsu experience; and minting over 15 Jiu-Jitsu Black Belts. Our Head Instructor, Vinicius Gimenes, has designed a program to take someone, who has never stepped foot on the mat, and turn them into a fit and confident individual, ready to compete, and defend themselves as well as those around them. This is the most in-depth Jiu-Jitsu Program for Beginners.

We are a 501.c.3 Non-profit based in the KC area dedicated to building resistance in youth through the sport of Brazilian Jiu-Jitsu. All of our memberships go towards supporting our scholarship programs. We provide quality martial arts in Overland Park to those in need, making sure that everyone, of all ages, has a chance to immerse themselves in this amazing sport that is loved by people around the world. Get yourself and your kids active, building strength and healthy relationships by becoming a part of our team right here in Overland Park.

Get to Know our Jiu-Jitsu Programs

We are a professional, reliable, and effective team. Jiu Jitsu is a martial art form, an expression of oneself physically, through movement. The world’s most effective martial art here in Overland Park. Jiu Jitsu without the gi. Fast-paced and tons of fun.

The best place to develop your takedown game. A fun program built upon the core principles of martial arts, self-defense, discipline, and respect. Lose fat, gain muscle, and tone up. Our certified personal trainers are here to help you reach your goals.

The most traditional form of BJJ taught in Overland Park is Gi Jiu-Jitsu. A style popularized in Brazil by a Japanese man named Mitsuyo Maeda in the early 1900s. The Kodokan Judo expert traveled the globe looking to find challenges to his prowess as a martial artist. He traveled through the US, South America, and Europe before finally settling in Brazil where he was introduced to Carlos Gracie whose family developed the same love for the martial arts that we all share today. It was through Carlos and the Gracie family that the Judo they were taught turned into Brazilian Jiu-jitsu after the development of more specialized ground fighting techniques.

Skip forward to 1993, and Royce Gracie has entered the first-ever Ultimate Fighting Championship, an event pitting the world’s best martial artists against each other. His dominant performance launched the Gracie name and their jiu-jitsu to new heights in the martial arts world and is responsible for its popularity and success today.

I have been going to E3 Jiu-Jitsu now for 1 year. From the first moment you walk through the doors everyone here makes you feel like you’ve always been here. So welcoming and kind are the owners. You don’t need to know a thing about Jiu-Jitsu. Charlie is an amazing instructor trained by world class Jiu-Jitsu champions. You will not only lose weight and get in the best shape of your life, but you will also learn proper self-defense as well. My 10 year old daughter also does Jiu-Jitsu here and she loves learning with the other kids in her classes. A great place to train martial arts with some of the best people I know. I can’t think of any other gym I would want to continue my Jiu-Jitsu journey with. Do yourself a favor and give this martial arts academy a try.

I’ve been training the grappling art of Brazilian Jiu-Jitsu here in Overland Park for about 5 months and the whole facility and staff are very friendly and great. It’s family friendly and the martial arts training is great. Regardless of your skill level you’ll feel right at home and welcomed as well. The facility is great, the bathrooms have a shower, there’s plenty of mat space, they’ve got plenty of heavy bags to practice your striking in kickboxing, and they have a microwave and refrigerator to store your post-workout shakes and other items.

I cannot stress enough how great everyone here is. There are kids that are 5 year old in the kids classes and the instructor takes his time to be sure everyone is learning at their own pace. My daughter asks me every day if she has class that night because she loves martial arts so much. For adult martial arts classes the instructor makes sure everyone understands the drills. It’s great exercise and you learn something while exercising. It’s more than a business, it’s a genuine community from the first moment you walk in the door. They are definitely doing great things for everyone in Overland Park.

Very affordable price, quality facilities with a great location in Overland Park.  Charlie is amazing with my young child who is very shy and nervous. His enthusiasm and excitement ensures he develops a love for the martial arts. He has a great time when he gets over his nerves!

Looking for more info? Drop us a line.

What Makes our Programs SO Successful?

Here at E3 Jiu-Jitsu, we eat sleep, and breath martial arts. All of our instructors at our Overland Park location are full-time athletes and their dedication is readily apparent. Coaching their team to gold medals at global and local events alike. Their leadership is guiding our team to success in every aspect of competition. Your martial arts instructors should be able to defend themselves and should be able to demonstrate this at any time and our athletes show this ability every time they step onto the mats.  Through time-tested techniques, expert support, and a supportive community, Professor Vinicius Gimenes has personally crafted our Overland Park staff into competent professionals ready to guide all of our Overland Park students to success.

Ready to take your first steps? Drop us a line! 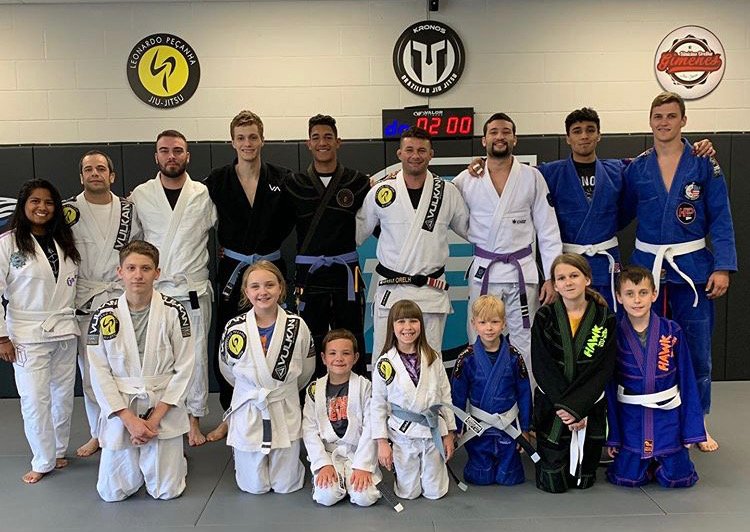